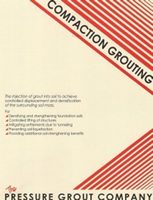 Compaction grouting uses controlled grout displacement to increase the density of soft or loose soils. It utilizes a thick, viscous, cement-like mass that is designed to displace and densify the structure of the soil matrix. It is typically used for liquefaction abatement, thwarting future settlements, structural lifting, and remediation of sinkholes.

This highly effective grouting technique increases the soil density, thus increasing shear strength, bearing capacity and eliminating settlements. This is accomplished by using a high pumping pressure to expand a bulb of very low slump grout through an injection pipe. The expanding mass of grout compacts the soil around each point that it is discharged. The most improvement can be achieved in granular, alluvial soils or man-made fills. The Pressure Grout Company has developed applications for densifying soft soils and clays, including Bay mud and peat.

A small diameter (1.5 – 3 inch) steel casing is advanced through the zone to be improved, and a stiff mortar-like grout is injected at high pressure to displace and compact the surrounding soils. Pumping is continued as the grout casing is withdrawn to the next stage.

Compaction Grouting results in a denser soil that is less susceptible to liquefaction and lateral spreading. Compaction Grouting also improves the soil’s global shear strength through the improvement of the displaced soils as well as the grout body itself.

The principal applications for Compaction Grouting are:

Click on our video to watch compaction grouting in action during our recent project at Cabrillo High School in Long Beach, California.

Also,download our company brochure about this technique.